More than 300 people have been injured, five seriously, after a section of wooden platform collapsed at an urban sports and music festival in Spain, γράφει το BBC.

It had been packed with people watching a rap artist at the two-day O Marisquiño event in the north-west city of Vigo, in Galicia.

Police confirmed that there were no known fatalities.

Witnesses reported scenes of panic as people - many of them teenagers - tried to scramble to safety.

Some fell into the sea.

Personal effects such as mobile phones and handbags were left scattered on the ground.

Several emergency teams attended to the injured, and divers were sent into the sea to check that no-one was trapped beneath the structure. 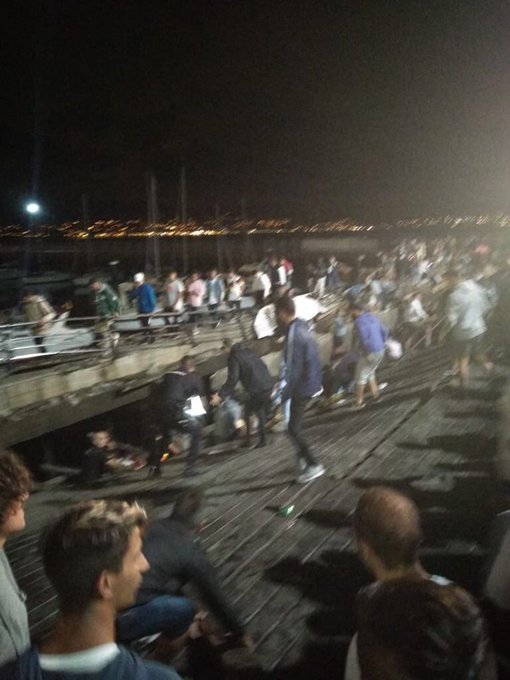 The incident happened shortly before midnight on Sunday as a crowd was listening to the Majorcan rap artist Rels B.

According to eyewitnesses, the wooden platform gave way during the first song of the concert as Rels B, who had just started his performance, told the crowd to jump, local media report.

"The floor [of the platform] dropped like a lift. It was a matter of five seconds," Aitana Alonso told a local newspaper. "It broke and we all fell. People fell on me. I had trouble getting out. I was trying to get out and skidded, my foot got stuck, in the water. I got it out. A boy gave me his hand and I got out. I felt paralysed and [then] I left. There was a girl with blood on her head."

"These are provisional figures, patients are still being evaluated... The vast majority are light injuries for bruises. There are five hospitalizations, mainly broken bones and some head injuries," he told local radio.

In a tweet (in Spanish), Rels B wished "strength" to the injured and advised anyone worried about friends or relatives to contact an emergency information point set up by festival organisers.

The mayor of the city, Abel Caballero, has said there will be an investigation into the causes of the incident.

It is not yet clear whether the platform collapsed because there were too many people on it, or because the structure itself was weak, or whether other factors were involved.

O Marisquiño is a free festival taking place outdoors in Vigo in August, attended by some 160,000 visitors.

It features various cultural activities, including concerts and gastronomy, and some 10 sports competitions - including skateboarding and mountain biking - over a three-day period.