The results of the implementation of the Joint Programme of the EU and CoE aimed at improving the justice system in Kazakhstan were presented at a recent event at the Council of Europein Strasbourg on 26 June 2018.

“The President of Kazakhstan has initiated a number of substantial institutional reforms aimed at strengthening of independence of courts, transparency of the penitentiary system, increasing the efficiency of the administrative service and further democratization,” said Vassilenko.

“In this respect, the Joint program of the European Union and the Council of Europe entitled “Support to the Kazakh authorities in improving the quality and efficiency of the Kazakh justice system” was one of the key projects for Kazakhstan. Close cooperation with European institutions is a strategic priority of Kazakhstan's foreign policy”, he added.

The Joint Programme was aimed at bringing the criminal justice framework and institutional practice of Kazakhstan closer in line with European and international standards and practices through a range of measures in support of the on-going efforts of the Kazakh authorities to improve the justice system. Its main beneficiaries were judges, prosecutors, law-enforcement officers, lawyers, representatives of the national human rights institutions and mediators. 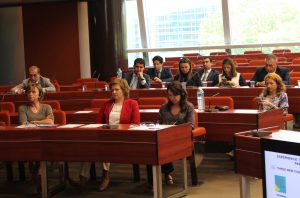 Delegations of the Supreme Court, the General Prosecutor’s Office, the Ministry of Foreign Affairs, the Commissioner for Human Rights, the National Preventive Mechanism and the Republican Bar Association have joined in 7 official and working level visits to the Council of Europe here in Strasbourg, international conferences in Belarus, Estonia and Slovenia and study trips to Lithuania, the Netherlands, Slovenia and Spain, to exchange experiences and good practices.

“Kazakhstan continues to actively participate in the most important international acts on human rights. It is party to more than 60 international treaties, 7 of which are UN conventions. As a result of a large-scale reform, based on the experience of OECD countries, in 2015, the criminal, criminal procedure and penitentiary codes have been fully updated”, said Akhmetzhanov.

“All these reforms translated into the reduction of number of prisoners from 66 thousand to 34 thousand people since 1991, of which 16 thousand were in the last 4 years. In the International Prison Index of quantity of prisoners per 100,000 of the national population, Kazakhstan today is ranked 84th, ahead of Latvia, Estonia, Czech Republic, Poland and Slovakia”, he noted.

Akhmetzhanov stated that a new draft law was aimed at reducing the repressiveness of criminal and criminal procedure codes, adding “only those who are dangerous for society are subject to incarceration, and those who committed non-violent grave crimes will not be subject to incarceration”. The draft law has already received approval in the lower chamber of Parliament of Kazakhstan.

The Deputy Prosecutor General stressed that Kazakhstan has introduced tougher penalties for torture and better guarantees for protection of victims. Since 2015 those convicted for torture cannot be granted amnesty or exempted from responsibility where the statute of limitations has expired.

Judge of the Supreme Court Madiyar Balken said that the President of Kazakhstan provided political leadership by setting up a Special commission on Modernization of the Judiciary.

“There is a clear demand on the part of the society. The Supreme Court has now the vision to respond to these demands of the society. The philosophy of new Chief Justice of Kazakhstan is to strive towards a citizen-centred justice institution, based on a competent & highly engaged team, open dialogue & effective communications, efficient processes, and IT innovation”, he added.

“We developed an action plan with clear benchmarks and indicators. We set up the overall governance and project management structure to steer the change process into quality outcomes.  It is the Judicial Modernization Board, which has leading judges and court managers to ensure oversight and sustainability of program results”, said Balken. He added that court users already see results and provide positive feedback.

Head of the Department of the Directorate General of Human Rights and Rule of Law at the Council of Europe Hanne Juncher said that 750 representatives of the judiciary, prosecution service, law enforcement, penitentiary, bar, national human rights mechanisms, NGOs and academia took part in 8 high level conferences in Kazakhstan on issues related to justice and human rights.

“We carried out 15 fact-finding missions, on access to court decisions, mediation, performance evaluation of judges, court management, acquittal rates, the prevention and effective investigation of torture”, she noted.

“It has been a very intensive and rewarding four years. After a gentle start, during which working methods had to be put in place and trust built up, the Joint Programme has clearly become a success story. The Kazakh institutions have engaged fully in the issues, seizing the opportunities for Council of Europe expertise and undertaking new measures following Council of Europe input”, Juncher stated.