The members of both parliaments, according to the Kazakh Mazhilis (lower house of Parliament) discussed Kazakh and EU foreign and security policies as well as commended Kazakhstan’s non-permanent membership in the UN Security Council, its efforts to help restore peace in Afghanistan and Kazakhstan’s assistance in efforts to achieve peace in Syria.

The document stated “both sides confirmed a strong commitment to further deepening close and mutually beneficial cooperation based on common values and mutual interests”, while also covering security, economic and social issues, energy security, water resource management and regional cooperation, among other topics.

The declaration also welcomed the abolition by Kazakhstan of visa requirements for the EU citizens and called on EU member states to grant a mandate to the European Commission to begin negotiations to facilitate the visa regime for Kazakh citizens visiting the EU.

The sides emphasised the new Enhanced Partnership and Cooperation Agreement (EPCA) between Kazakhstan and the EU “has created a solid foundation for further progressive development of bilateral cooperation.”

The EPCA’s implementation, according to the declaration, “will significantly increase the volume of trade and investments, generate new opportunities for economic growth and job creation”.

The delegation of European Parliament led by Latvia’s Iveta Grigule MEP also met with the Speaker of the Mazhilis, Nurlan Nigmatulin, who said expanding relations with the EU is a Kazakh foreign policy priority and that the newly updated EU Strategy for Central Asia will offer opportunities for additional cooperation. 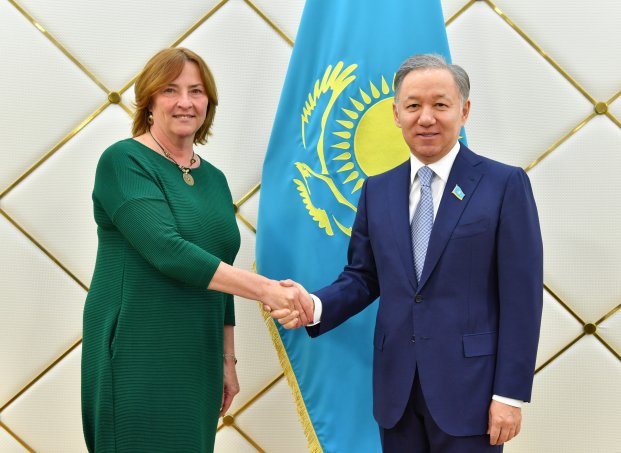 Grigule noted the EU views Kazakhstan as its most important partner in the region. Stressing the importance of Kazakh President Nursultan Nazarbayev’s policy of resolving conflicts exclusively through negotiations, she called Kazakhstan a good example, highlighting its role in the settlement of the Syrian crisis and the stabilisation of the situation in Afghanistan.

The following day, the EP delegation met with Kazakhstan’s Prosecutor General Kairat Kozhamzharov, who briefed them on reforms in the criminal and criminal procedural legislation in Kazakhstan, as it works to bring legislation in line with European best practices. The meeting also included a presentation of the Centre for Law Enforcement Services, the press service of the Prosecutor General’s Office reports.

Of particular interest were Kazakhstan’s experience in humanising criminal policy, which helped the country improve its position in the World Prison Report from third to 73rd in terms of prison population rate and measures to modernise procedural legislation.

According to the press service, the delegation praised Kazakhstan’s efforts to reduce the harshness of the law and enhance the re-socialisation of convicts.

“The Prosecutor General’s Office is undoubtedly the foundation stone of the rule of law. It has all the responsibility for observing and protecting the rights of citizens,” Grigule reportedly said.

In addition, the delegates got acquainted with the information on the criminal actions of the persons hiding from Kazakhstan’s justice in Europe, including Mukhtar Ablyazov and his accomplices, the Khrapunov family, the Ryskaliyev brothers, Yerkanat Taizhanov and others.

“During the discussions, both sides criticised Ablyazov’s criminal actions and attempts to destabilise the situation in the country,” the press service said referring to Kazakhstan.

Kozhamzharov thanked the EP members for their support for the EPCA.

“The experience we gained in cooperation shows the effectiveness of Kazakhstan’s legal system and our readiness to act as a reliable partner in Eurasia. We confirmed that the most serious crimes that concern the entire international community should not be left unpunished,” he said.

The next meeting of the Kazakhstan-EU PCC is to take place in Brussels in 2019.