The maximum stake for fixed odds betting terminals (FOBT) should be cut to £30 or less, the UK's Gambling Commission has recommended, writes Bill Wilson.

Currently people can bet up to £100 every 20 seconds on electronic casino games, such as roulette and blackjack.

It comes after a consultation on FOBTs for the Department for Digital, Culture, Media and Sport.

The commission says the maximum stake on "slots games", like traditional fruit machine games, should be £2.

The advice has been given to support the government with its review of gambling machines, with a decision expected in coming weeks.

Why has the Gambling Commission been looking at this issue?

FOTBs have come under criticism for encouraging high-stakes gambling and exposing people to the risk of gambling harm. The machines have been called the "crack cocaine" of gambling by campaigners who say they let players lose money too quickly, leading to addiction and social problems.

And Tim Miller, executive director of the Gambling Commission, told the BBC that its remit when considering stake recommendations had been "to protect vulnerable people from harm".

Fixed-odds terminals were introduced in casinos and betting shops in 1999, and offer computerised games at the touch of a button.

The Gambling Commission's report said the £30 limit for casino-type games had been recommended, because a higher limit means players could potentially "lose large amounts of money in a short space of time".

The government now has to decide whether to accept the commission's advice on the stake limit, or decide to impose a lower figure.

Is it all about limiting stake sizes?

The government began to look at FOBT machines in October 2016, when it made a "call for evidence" on the number and location of terminals and the measures in place to protect players.

Now Gambling Commission chief executive Neil McArthur has said: "We've put consumers at the heart of our advice - advice which is based on the best available evidence and is focused on reducing the risk of gambling-related harm. 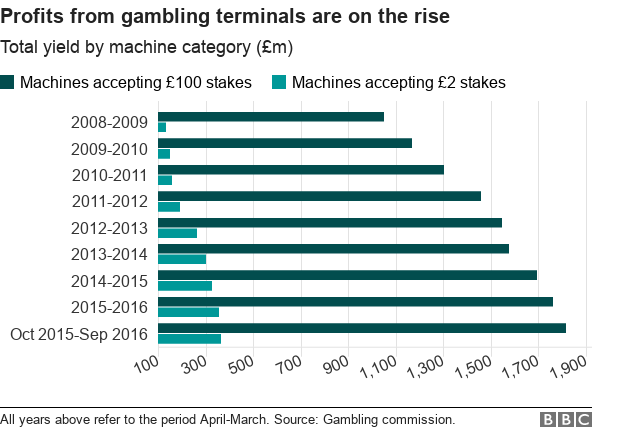 "That is why we have recommended a stake cut plus a comprehensive package of other measures to protect consumers. We have proposed actions that will tackle both the risk of harm and provide solutions that are sustainable in the longer term."

These include working with the gambling industry and others on steps to make limit-setting more effective - this could include ending sessions when consumers reach time and money limits.

Another recommendation is a proposed ban on machines being able to allow different - high and low stake - categories of games to be played in a single session.

How profitable are these machines?

However, Mr Miller of the Gambling Commission told the BBC that although the gambling industry had argued that any cuts in stakes would harm the sector, those arguments played no part in its recommendations to government. 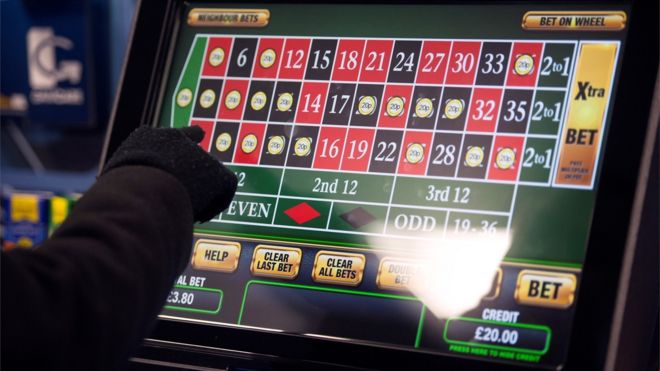 Earlier government estimates had suggested that a £2 cap could lead to a £5.5bn loss in tax revenues over the next 10 years.

But MPs on the FOBTs All Party Parliamentary Group have said large gambling sector losses have been exaggerated.

Rather, quoting the Centre for Economic and Business Research think tank, they say the cost of problem gambling in the UK is £1.5bn a year, "when its impact on wider social welfare is taken into account - including areas such as employment, mental health and financial stability".

Investors appeared to welcome the recommendations, as shares in gambling firms climbed strongly after the commission's announcement, with Ladbrokes Coral and William Hill both up more than 5%.

"This should be a relief for the sector as the worst-case scenario looks to have been avoided. Ministers will now have to justify a cut below £30 on grounds of significant risk of harm," said analyst Neil Wilson at ETX Capital.

The Association of British Bookmakers has claimed that a £30 maximum stake would see 2,100 betting shops closed and 10,000 jobs lost.

"We fully understand that there is public concern and that there will be a stake cut to reduce the levels of losses on machines in betting shops," it said after the Gambling Commission's announcement.

"In the interim, we remain committed to introducing further measures to address problem gambling and will continue to work with all interested parties."

What has been the reaction from campaigners?

Tom Watson MP, Labour's Shadow Digital, Culture, Media and Sport Secretary, said: "This is a deeply disappointing report from the Gambling Commission who appear to have caved in to industry pressure.

"These machines are at the heart of the UK's hidden epidemic of problem gambling. The Government must cut the stake to £2 on all FOBT machines including the highly addictive roulette style games, as well as increase the delay between each play."

Carolyn Harris, chair of the FOBTs All Party Parliamentary Group, said: "The problem is that these machines are addictive.

"It has got to be £2 [maximum stake], nothing else is acceptable. It is now for the Secretary of State to make a decision."

The Gambling Commission recommendations have been sent to Matt Hancock, Secretary of State for Digital, Culture, Media and Sport. Ministers now have to decide whether to implement any of the commission's recommendations.

Charity GambleAware said it welcomed the commission's "contributions to the ongoing discussion".

"In the meantime, we are waiting to hear what the ministers conclude in their review, and hope to hear the results soon."