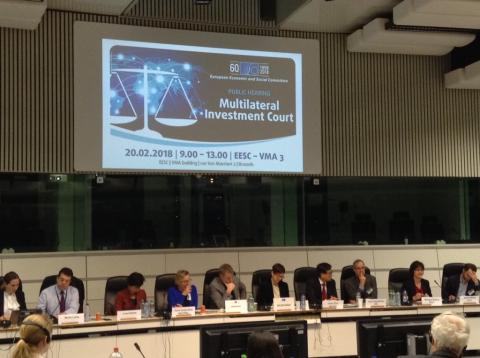 This was the main message from the public hearing on a possible future multilateral court, held by the EESC on 20 February in Brussels.

Representatives of civil society organizations, think tanks, UN agencies and EU institutions gathered in Brussels to take part in the debate around the possible modernization and reform of the investor-to-state dispute settlement (ISDS) system and the European Commission's proposal to set up a Multilateral Investment Court (MIC).

Philippe De Buck, EESC rapporteur on the topic, emphasized that, while there is general agreement that investments abroad need some kind of protection, the Multilateral Investment Court is a long-term political project that would need the support of a critical mass of countries in order to come into existence. The co-rapporteur, Tanja Buzek, stressed that the question of the Multilateral Investment Court had many aspects, both procedural and substantial, that had to be taken into consideration.

Martin Lukas from the European Commission focused on the detailed structure of the future Multilateral Investment Court – a court with a first instance tribunal, an appeal tribunal and highly qualified judges, obliged to adhere to the strictest ethical standards. This permanent body should work in a transparent, efficient and predictable manner, with its decisions enforceable at the international level. The MIC should be open to all interested countries to join, but it should also have special provisions for developing countries and small and medium-sized enterprises.

The participants in the public hearing pointed out that the EU was leading the reform of investment protection by already negotiating the inclusion of the investment court system (ICS) in some of its recent agreements, for example with Canada and Vietnam.

In September 2017 the Commission adopted a Recommendation for a Council Decision authorizing the opening of negotiations for a Convention establishing a multilateral court for the settlement of investment disputes. The objective of the Commission document is to start negotiations for creating a Multilateral Investment Court under the auspices of the United Nations Commission on International Trade Law (UNCITRAL). The Commission's recommendation came as a response to criticism of the current investor-to-State dispute settlement (ISDS) arrangements, based on ad hoc commercial arbitration.

The outcomes of the public hearing will feed into the EESC's opinion on this topic, requested by the Commission, which is expected to be presented at the EESC's plenary session in May 2018.

The EU is the world’s largest source and recipient of foreign direct investment. Worldwide, there are more than 3 200 existing (bilateral) investment agreements – including over 1 400 agreements concluded by EU member states. Therefore it is important for the EU to ensure that the resolution of investment disputes operates effectively at an international level.